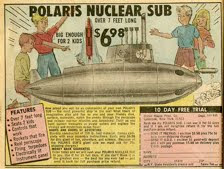 The bast part of the old comic books were all those neat ads in the back. I always wanted a pair of the X-Ray Specs.

Back in the day when I was a kid, my friend up the street invited about 10 kids to his basement after school to check out his new submarine. Yes, Ben was the first one on the block and only one to order the $6.98 cardboard Nuclear Sub.

His idea was to start a submarine club, well with all those kids in the basement you knew it was only a matter of time before things got out of hand. Of all people our host of the Submarine Club Ben yelled, "Fight Like Apes", everybody started going wild. My friend Fred was hiding in the sub, a kid name John picked up a chair and sent it into and broke the basement window. Ben's mother started screaming and we all took off in different directions.

It was something out of the Little Rascal's TV show and the submarine club only lasted a few hours. Just plan fun kid stuff for $6.98 not including cost of window replacement.
Posted by Jim at 6:00 PM 2 comments:

Over the past week or so I have been reading up on the Circuit Construction chapter from the 2005 ARRL Handbook.

Its amazing how many small helpful tips you can pick up from an article. I am leaning toward a simple QRP circuit using ground-plane construction. Just looks cool and to try and make it look neat and clean should be interesting.

Scanning the net and a few magazines for a few designs.

Will keep you posted.
Posted by Jim at 10:00 AM No comments:

This past Sunday I finished up The Elenco AM radio kit. The final tune up was easy and everything checked out.

Radio works well and is on at my desk for news and talk through out the day. A very easy kit to build plus offers the new builder experience and confidence to move on to the next project.

Elenco also puts out an AM/FM radio kit and maybe later in the year I will build it. I must say Elenco Electronics has a nice selection of kits with well written and very clear instruction manuals.

On a sad note is the passing of Dave Ingram, K4TWJ, yesterday. Last night I took out the January CQ magazine and read his How It Works column on purchasing and restoring old rigs. His World of Ideas had some interesting reading on crystal radios. Readers of CQ and the qrp community in general are going to miss his monthly articles and enthusiasm for radio and electronics.
Posted by Jim at 11:00 AM 2 comments:

I do not usually forward the emails that come across the screen but this one is a keeper. Plus their is a mention of a hobby a few of us enjoy.

ENJOY THE RIDE. THERE IS NO RETURN TICKET!

George Carlin on aging!
(Absolutely Brilliant)
IF YOU DON'T READ THIS TO THE VERY END, YOU HAVE LOST A DAY IN YOUR LIFE.

Do you realize that the only time in our lives when we like to get old is when we're kids? If you're less than 10 years old, you're so excited about aging that you think in fractions.

You get into your teens, now they can't hold you back. You jump to the next number, or even a few ahead.

But then you turn 30. Oooohh, what happened there? Makes you sound like bad milk! He TURNED; we had to throw him out. There's no fun now, you're Just a sour-dumpling.. What's wrong? What's changed?

You've built up so much speed that you HIT 70! After that, it's a day-by-day thing; you HIT Wednesday!

HOW TO STAY YOUNG
1.. Throw out nonessential numbers. This includes age, weight and height. Let the doctors worry about them. That is why you pay them.

2. Keep only cheerful friends. The grouches pull you down.

3.Keep learning. Learn more about the computer, crafts, gardening, whatever, even ham radio. Never let the brain idle. 'An idle mind is the devil's workshop.' And the devil's family name is Alzheimer's.

5. Laugh often, long and loud. Laugh until you gasp for breath.

6. The tears happen. Endure, grieve, and move on. The only person, who is with us our entire life, is ourselves Be ALIVE while you are alive.

7. Surround yourself with what you love , whether it's family, pets, keepsakes, music, plants, hobbies, whatever. Your home is your refuge.

9. Don't take guilt trips. Take a trip to the mall, even to the next county; to a foreign country, but NOT to where the guilt is.

10. Tell the people you love that you love them, at every opportunity.
AND, ALWAYS REMEMBER:
Life is not measured by the number of breaths we take, but by the moments that take our breath away.
And, if you don't send this to at least 8 people - who cares? But do share this with someone. We all need to live life to its fullest each day!!

Life's journey is not to
arrive at the grave safely
in a well preserved body,
but rather to skid in sideways,
totally used up and worn out, shouting
'...man, what a ride!'
Posted by Jim at 6:00 PM 2 comments: 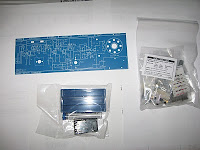 This afternoon I broke out a Elenco Model AM-550K AM Radio Kit. The kit is the IC version built around 3 transistors and a diode. Elenco also offers a 7 transistor AM radio.

This kit looks pretty cool when complete, includes its own display stand. I always keep an AM radio on in the background at work tuned to either the local news and weather on the eights or NY public radio. When complete this will find a corner on my busy work desk.

As with all my projects this kit will take some time, I build at a slow pace but also have time only on weekends and the odd night.

Will keep you updated.
Posted by Jim at 9:45 PM No comments: